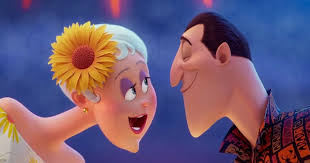 Count Dracula (Sandler) has everything he could want in his life, only he’s lonely. He’s been a widower for a hundred years now, and has never taken a break from maintaining his hotel. His daughter, Mavis (Gomez), organizes a family vacation mainly to give her dad a break, which soon becomes a family vacation for all the monster families as they take off on a cruise to Atlantis. Count Dracula, determined not to have fun, nevertheless becomes infatuated with the cruise’s captain, Ericka (Hahn), who is secretly a descendant of Van Helsing and despises monsters. It’s a fantastic premise squandered by scatter shot writing. It’s a gag every second which is fine when a solid percentage of the gags land (Anchorman for example). When the gags are merely amusing at best, as they are here, one wishes the filmmakers aspired for more, instead of settling on quick jokes. The animation is breathtaking at times, and deserved a better purpose.