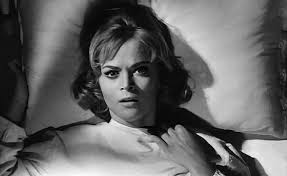 Nora Davis (Román), apparently an American, though played by an Italian actress, arrives in Rome to care for her sick Aunt. She meets her Aunt’s attractive doctor, Marcello (Saxon), an Italian played by an American, and the two are instantly attracted to one another. Later, after a bad episode where her Aunt’s health fails, Nora runs out to the streets and witnesses a murder, or at least she thinks she does. The police believe she had a hallucination brought on by trauma. Slick, incredibly lithe camera movement highlight what was an early example of the Italian giallo genre( horror or thriller). Beautiful visuals and star in hand, the film gets by, but is never truly thrilling or surprising. Still, very entertaining.