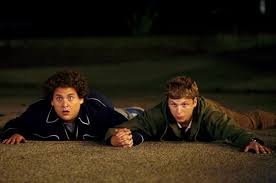 Seth (Hill) and Evan (Cera), like many teen movie characters before them, vow to have sex before leaving for college, and see their chances after being invited to a party by a pretty, popular girl named Jules (Stone). The problem is that they promised to bring drinks, and in order to get them, they need the help of Fogel (Mintz-Plasse), also known as McLovin, a huge dork with a fake I.D. One thing after another happens until Seth and Evan’s mission to arrive at the party with alcohol becomes as epic and wandering as The Odyssey.  Hilarious movie with non-stop head shaking but quotable dialogue, delivered with expert comedic skill by Hill and Cera in particular.