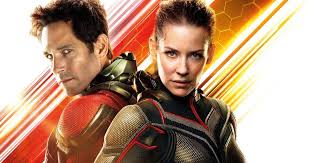 Scott Lang (Rudd) seems to have burnt his bridges with Hank Pym (Douglas) and Hope (Lilly) after going rogue with Captain America back in Civil War (2016). On top of that, he was sentenced to two years house arrest. As he closes in on his release date, Hank and Hope see a chance to rescue Janet (Pfeiffer), the former’s wife and the latter’s mother, from the quantum realm she was lost to decades ago. Unfortunately for everyone, Scott appears to be the key, forcing a reunion and putting Scott in danger with his parole officer. Meanwhile, an enigmatic figure known as Ghost materializes at every turn. Fun film and a 180 from the heavy, substantial Avengers: Infinity War. Ant-Man and the Wasp is slightly better than the first one. Often funny, with some cool ideas involving shrinking and growing. It does, however, feel like a modest entry in a series of films that all run through the same machine in my opinion. The end result is always nice, but never extraordinary. Add to that, Ant-man, or, more specifically, Scott Lang, is a second-tier hero, largely dependent on Hank Pym.