Former Pixar and Disney Animation titan, John Lasseter had this to say about the midling success of The Princess and the Frog back in 2009, “I was determined to bring back [hand-drawn animation] because I felt it was such a heritage of the Disney studio, and I love the art form … I was stunned that Princess didn’t do better. We dug into it and did a lot of research and focus groups. It was viewed as old-fashioned by the audience.” The film, as mentioned in the quote, was a return to the hand-drawn style of animation used during Disney’s hey-day and all the way through until about the mid-2000s when computer animation took over. Was the style the problem? Has 2-D animation really become so antiquated that audiences were unwilling to turn up for a film of that type. Pretty much every single  other Disney Princess movie has made a boatload of money. The directors of Princess and the Frog had previously made Aladdin and The Little Mermaid, and have since made Moana. All of which raked in the dough. I’m just not sure Princess and the Frog’s limited commercial success can be attributed to the art style, and I’m not ready to bring race into the picture, since Moana (Pacific Islander), Aladdin (Arabic), and Mulan (Chinese) all did very well at the box office. Another titan believed it had more to do with marketing, saying that putting princess in the title led people to believe that the film was only for girls. Whatever the case may be, does Princess and the Frog stand any chance of a live-action reworking? 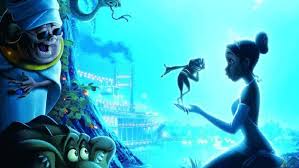 I, personally, would rather see live-action remakes of films Disney didn’t get 100% right (reference my Black Cauldron article) than a remake of Aladdin (I remain highly skeptical). Why not take a chance and see if you can’t remedy your earlier mistakes with a remake? I’d also consider making Prince Naveen black since that was one of the main complaints people had regarding the movie. There’s never been a black prince. Granted the animation and special effects would have to take over since most of the film is centered on talking frogs and an alligator. Hmm?