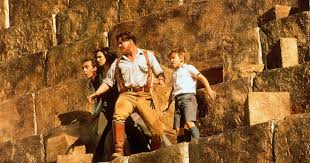 Rick and Evelyn (Fraser and Weisz) return, now married with a son, as does her brother, Jonathan (Hannah), and the mummy. The plot hurdles along. The villainous mummy attempts to bring back The Scorpion King (Johnson) in order to slay him, which would grant him control of an immortal army. Typical sequel in which the filmmakers pile on more action and more special effects. Of course, less is often more, as is the case here. Still a very entertaining action adventure, striking the right tone for the picture. The special effects are badly dated, but somehow still thrilling at times.