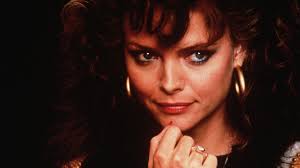 Modern screwball comedy starring Michelle Pfeiffer as Angela de Marco, frustrated wife of mobster Frank “The Cucumber” de Marco (Baldwin). Frank works for Tony the Tiger Russo (Stockwell), who has the FBI hot on his heels. When he finds Frank sleeping with his mistress, Tony kills him, and the FBI see a chance to finally get something to stick him with. They send agent Mike Downey (Modine) to monitor Angela, hoping she’ll give them the evidence they need, but Mike begins to fall for her. Breezy comedy with a terrific lead performance, but the film under-cooks the romantic interest, the character of Mike Downey. He’s never given the time to develop as a serious love interest. He does nothing to show why Angela loves him. Dean Stockwell steals much of the show.