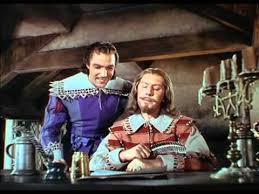 Premier adaptation of Alexandre Dumas’ enduring, oft-told classic, Gene Kelly stars as d’Artagnan, a French country boy sent to the city to show his meddle and serve his king and country. He seeks to join the musketeers, a service dedicated to their king, and soon finds himself at odds with three older members: Athos (Heflin), Pathos (Young), and Aramis (Coote). Their animosity quickly turns to friendship, and the adventure begins. d’Artagnan could not have picked a better moment, as King Louis XIII (Morgan) is in terrible danger. Wily, ruthless Richelieu (Price), with the help of the beautiful, but evil Countess de Winter (Turner), has a number of plots working to change the balance of power. Sometimes episodic, always slightly corny, this is, in the end, fantastic entertainment. Colorful, vivacious, and actually fairly faithful to the material. You certainly can’t beat this cast, especially Vincent Price as the cunning Richelieu. Gene Kelly’s stunt work, made famous through musicals, is equally impressive here in this swashbuckler.