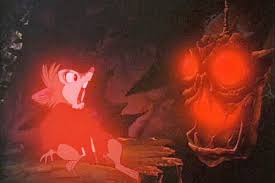 Mrs. Brisby (Hartman), a mouse and widowed mother, looks after her three kids with some help from an overbearing Aunt on the land of a farmer. She prepares to move her family as their current home stands in the way of a forthcoming plowing, when one of her children falls sick with pneumonia. Unable to move him in his condition, she looks for old friends of her deceased husband’s, hoping they can help her and her boy. Soon she discovers a secret society of rats with strange abilities and intelligence, but they’re in a fix themselves. Scary, exciting stuff from Don Bluth and his team of animators, in their first foray away from Disney. The animation is top-grade, the story intrigues, and there are several suspenseful scenes that had me holding my breath.