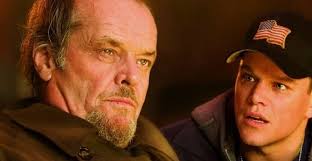 Oscar winning remake of the Chinese Infernal Affairs trilogy, The Departed stars DiCaprio as Billy, a cop gone undercover in local big-shot, mob boss, Frank Costello’s (Nicholson) organization, but Frank has a mole of his own planted in the police department in the form of Colin (Damon). Neither side can seem to get the drop on the other, as a game of cat and mouse begins. Infinitely entertaining premise provides the thrills and suspense, but also an over the top style and hyper-active camera work. Nicholson’s large performance with his profane and crude character is fun to watch, but kept me at a distance in terms of taking the film seriously. I also didn’t like many of the aesthetic choices, including the jarring editing, dutch angles, and screwball delivery. It highlights the film’s lack of depth.