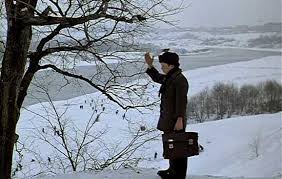 Fragmented narrative chronicling several key moments in the life of a poet, Alexei, based on the writer/director Andrei Tarkovsky himself. Alternating between adolescence and adulthood, color and black and white photography, this film is considered one of the great feats of modern cinema. I consider it an enigma that I’m not interested in probing. There are instances of great beauty in the film, but there are longer instances of uninvolving, static scenery, a meandering, monotonous rhythm, acting and action without context, and a surplus of meaningless poetry. The Mirror is a perfect litmus test film for film buffs. Many of those who laud Tarkovsky’s vanity project as a masterpiece will deride many of the Hollywood action flicks that I enjoy. That’s fine, but I’ll stand firmly on my belief that this is a bad film.