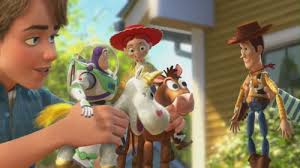 Andy’s grown up. It’s been ages since the heroes of Toy Story and Toy Story 2 have been played with. Most of the toys in Andy’s box are gone, and the ones that are left, led by Woody (Hanks) and Buzz (Allen), contemplate the next stage in their lives. With the dusty attic as their future, they find an alternative in a local day-care center, but the seemingly perfect center turns out to be more of a prison, and so the toys look to escape. Wonderful storytelling, dialogue, and animation, as with all of the Toy Story movies. Woody and Buzz are classic film buddies and their exploits are unforgettable. There are some very funny new characters, mainly Ken (voiced by Michael Keaton), and the emotional ending is a perfect finish.