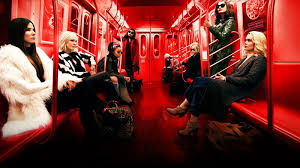 Debbie Ocean (Bullock), sister of the previous run of Ocean movies’ Danny Ocean, is fresh off of a five year stint in prison. Not reformed in the slightest, she puts into motion a plan she’s worked on for the whole of her sentence: a heist of a $150 million necklace by Cartier. To pull it off, she enlists her best friend, Lou (Blanchett), a master fence and suburban housewife, Tammy (Paulson), a jewelry maker, Amita (Kaling), a tech-wiz self-named Nine Ball (Rihanna), a pickpocket, Constance (Awkwafina), and an out-of-fashion designer, Rose (Carter). If you’re thinking that only makes seven, the eighth member of the group comes as a surprise late in the film. Debbie’s plan revolves around the Met Gala, where the necklace will be worn by celebrity Daphne Kruger (Hathaway), and her team spends three weeks leading up to the event preparing for the haul of their lives. There’s probably no point in harping on how original stories involving all female casts would better serve these stars and their audience, though it’s true. Ghostbusters struggled at the box office and this one isn’t exactly reaping in the money so far. That aside, I really liked this movie. I’m hearing the same thing from most people who’ve seen it: a breezy good time. Nothing substantial but perfectly watchable. I liked the cast which is likely a given. They all have their scenes, and Bullock always makes a compelling lead. Higher stakes (I know it sounds funny saying it about a $150 million heist) would have made the actual job more exciting, or even a more imposing villain fouling up the works. The operation went to smoothly.