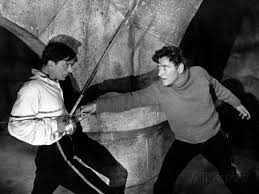 Rudolph Rassendyl (Coleman) is a humble British gentleman off on an idyll fishing trip in the Kingdom of Ruritania. There, he finds a country in the midst of conspiracy, murderous plots to usurp the crown, and other such politics. He also finds, or is found to be a perfect doppelganger of the king to be, Rudolph V (Coleman). The king to be, while not a bad man, is a louse and falls victim to his treacherous half-brother’s scheme, putting him in a temporary coma. This threatens to leave the crown and the country to that same brother, and so, Rudolph the fifth’s most loyal men set his look-a-like up for the throne, at least until the true king regains consciousness, but while playing the role of King, Rudolph meets and falls in love with the princess, Flavia (Carroll). Witty, romantic, and gripping. The best of the ’30s swashbucklers. Ronald Coleman is great in every role he plays, and Fairbanks Jr. makes an excellent foil; a dashing, charming, vicious rogue.