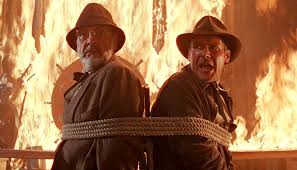 Indy (Ford) returns for a third adventure, this time, essentially, joining his father (Connery) on a quest for the Holy Grail. Complicating matters, as always: the Nazis. Ford and Connery are fantastic. Even amid the huge stunts and explosions, they’re never outshined. The love interest this time around, a seductive femme fatale named Elsa is underwhelming, but the rest of the supporting cast, Denholm Elliot and John Rhys-Davies in particular, returning to their roles from the first Indiana Jones, provide plenty of color. As with all of the original three Indiana Jones, this is marvelous adventure film, and Spielberg is at his best layering the suspense.