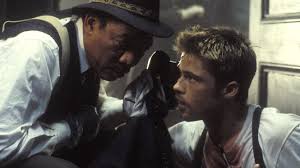 Supremely dark and controversial at its release, this police procedural follows an odd couple pair of cops- one, a calm, intelligent veteran on the cusp of retirement (played by Morgan Freeman) and the other, a hot-headed greenhorn (played by Brad Pitt)-as they track down a diabolical killer using his murders to reflect each of the seven deadly sins. At first viewing, I found the film entertaining, but vapid. Aside from the genuinely shocking material, the film is a pretty by the numbers thriller. After watching it again, I haven’t necessarily shifted from those views, only now, I appreciate its strengths more. First and foremost, Morgan Freeman’s rock solid performance is one of his best. He’s never hit a false note in his career, and I could watch him investigate a hamster’s disappearance. Secondly, and it shouldn’t be a huge spoiler at this point to say it, but Kevin Spacey’s killer is perfectly calculated. It could have easily been over-acted, and the whole picture would have been ruined since the last act depends so much on him. As with many David Fincher films, Se7en is grungy and gorgeous, and the finale is like a gut-punch.