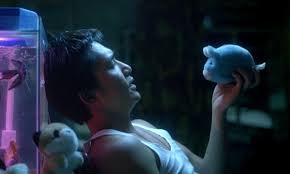 Two romantic tales involving police interweave in this movie: first, a young cop (Kaneshiro), getting over a break up, falls for a mysterious criminal (Lin). Second, another cop (Leung), also dealing with a breakup, can’t see the cute food store worker, Faye (Wong) who secretly loves him and sneaks into his apartment to clean up after him. I’ve never cared too much for Wong Kar-wai’s work, and it’s a shame because I love the subjects he explores, his romantic flourishes, and vivid imagery, but I’ve never been anything but apathetic towards his films. Chungking Express was my first of his works, and seeing it now for the third time, I still find it monotonous. Even the humor, which is present at times, takes the same note as the moments of sadness.