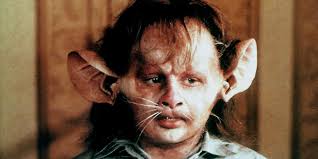 A young boy raised by his shrewd Grandmother discovers that the hotel they’re staying in is infested with children murdering witches (led by the Grand High Witch) forming a plot that could wipe out children everywhere. After being turned into a mouse, the boy teams up with his Grandmother to foil the evil witches’ plans. Adaptation of Roald Dahl’s novel, this is a bonafide horror story for kids. Children’s movies in the ’80s and, in this case early ’90s, were insane. This has some truly frightening stuff in it: the witches pulling off their masks to reveal their hideous true selves, kids being abducted in the street, weird body transformations. The opening sequence is remarkable, scary, and sad as we learn about a girl who became trapped in a miserable painting all her life. Anjelica Huston glides through the picture as the Grand High Witch as if everything is dreadfully boring to her, including the events of the film. She’s very funny and the film itself, which I believe compromises a little in the end, remains a solid creepfest.