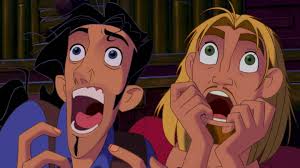 Two con artists steal a map, and, through a zany sequence of events, end up in the fabled El Dorado, a city of gold. The two are mistaken by the locals for gods, and use the misunderstanding for their greatest con yet. Unfortunately, a woman comes between them and a fanatical priest gets in their way. Clearly inspired by Kipling’s The Man Who Would Be King, the two main characters, thanks to great work by Kline and Branagh, as well as the writing, are fantastic; as witty and compelling as the Bob Hope-Bing Crosby pair that inspired them. Their adventure, however, is caught between being too serious (human sacrifices, flogging) and being light-hearted (Elton John songs, the happily ever after). Part of this is due to the intended audience being children, but I think the filmmakers (like Disney did with Hunchback of Notre Dame) could have went with something epic and meaty, closer to its source. Or, like the Bob Hope-Bing Crosby movies, just go full comedy, joke every second. As it is, it’s a decent enough picture, but only a couple of the Elton John songs are good, none of them memorable.