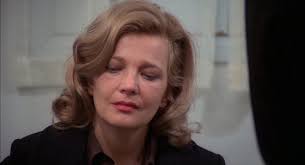 Myrtle Gordon (Rowlands), a star of the theater world, is on a downward spiral, exacerbated by the sudden, violent death of a young fan before her eyes. This is an elusive theater drama with hints of the supernatural, and, not knowing what to expect with it being my first Cassavetes’ film, I found it too confounding to be truly engaging. The main draw, the thing talked about most when Cassavetes is brought up, is the acting. Gena Rowlands, his wife and star, is exceptional. She has a broken down glamour in this picture that serves the story and makes her character haunting. I was less interested in the picture within a picture element to this film. The stage performance which the plot revolves around takes up close to half of the 2 and half hour running time.