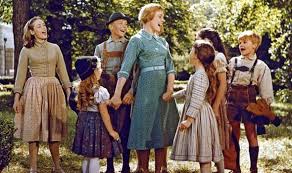 A young woman in 1930’s Austria struggles to fit in with the order of nuns she’s studying under, despite her relentless enthusiasm. They ask her to try working elsewhere for a time, to see if she finds her calling. And so she works as nanny for the wealthy but unhappy Von Trapp family that includes: the widower, Captain Von Trapp, and his seven children. Gradually, she works her way into the hearts of the children and the father, as the threat of Nazi Germany hangs over their beautiful country. I basically feel that there are people who love Sound of Music and people who pretend not to love Sound of Music. I don’t feel the need to pretend. It’s corny, joyous, moving, lovely, wonderful. The music is unforgettable and the story is long and sweeping.