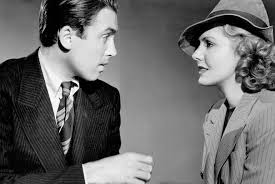 After the death of one of the Senators in an unnamed state, it falls to the governor to pick a replacement. But it’s a corrupt state of affairs, and the governor takes orders from Jim Taylor (Arnold), a man who has his hands in everything. They want a dummy in the Senate. Someone who will look pretty and say nothing. They pick Jefferson Smith (Stewart), and the young idealist proves them wrong, taking on all political corruption in the fight of his life, with the help of his cynical secretary, Saunders (Arthur). Classic Capra combination of ideals mixed with comedy and tears. Wonderful movie. James Stewart is in his best role here, and Jean Arthur is the perfect romantic foil as the jaded, intelligent Saunders. The supporting cast is great from the top down. Harry Carry, as the Vice-President, received an Oscar nomination with maybe a handful of lines.