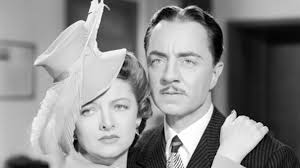 Nick and Nora Charles return, this time getting wrapped up in a murder case involving a friend on a casual trip to a wrestling match. After the first film, which is a great movie, this and the second one compete for the next best. It’s a return to a slightly more serious tone, with an engaging murder mystery and juicy characters. Powell and Loy are always the selling point though. What they bring to this series seems effortless. I also love the return of Lieutenant Abrams, played by Sam Levene,  who first appeared in After the Thin Man.