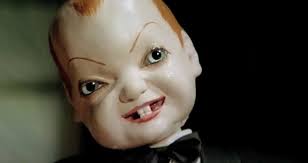 A medium (Meril) senses evil in the air, claiming a murderer is near while performing at a demonstration. She’s later violently killed for her sixth sense. Marcus (Hemmings), a British musician in Italy, witnesses her death and becomes the killer’s next target. Hoping to get to the bottom of things, he works with an overly eager reporter named Gianna to solve a string of murders. Argento is in a class of his own in terms of composition and camera movement. On the other hand, he clearly doesn’t care about dialogue, logic, or character development, and perhaps he’s right since none of the film’s deficiencies detract from its appeal. The lush color and brutal violence contrast nicely, and though the film is never all that scary, it’s thoroughly entertaining. Also, killer soundtrack.