January 2nd, 2015. A fellow tenant moves out. I never met the man (I assume it was a man), but he left behind a large laundry basket full of old, mostly sucky VHS tapes, and my adult life has never been the same. I rediscovered the magic. A long roll of magnetic tape protected by a hard plastic shell, but I’m getting ahead of myself. First I needed a VHS player. I found one sitting in my apartment basement, tossed aside by some other foolish tenant. My setup complete, I’ve since embarked on a journey to round up and amass the most epic collection of VHS tapes. Grabbing what others have discarded, buying from local bargain basements, I’ve just reached my first big milestone: 1,000 movies strong. True, not all of them are gold. When you’re picking up what others leave behind, there’s not going to be the same level of discernment. Many of them are horrible comedies (Airplane II, Wild Wild West ) or sequels to slasher films (I’ve got the whole Friday the 13th series, at least three Omen films, and the notorious bomb Exorcist II). But every once in a while, I’ll go to my local library, and find that someone’s put something like Body Double in the free-for-all bin, or Matinee, starring John Goodman; hidden gems that are hard to find on DVD .  Your question: Aside from the joy of collecting, do these VHS tapes have any value? Probably not, unless you’re like me, and believe in the immeasurable worth of nostalgia. I have over two dozen clam-shell VHS tapes. For those who don’t remember, Disney and other family video companies would put their tapes in cases like these: 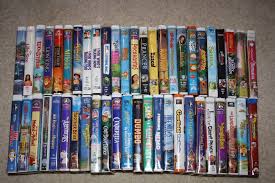 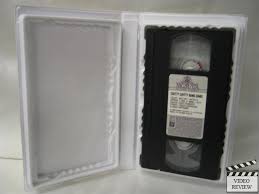 I love these movies. I’m steadily building up my masterpiece collection (a series Disney put out in the 90s). I have Pocahontas, Beauty and the Beast, Aladdin, The Lion King, Snow White and the Seven Dwarves, and The Great Mouse Detective. I love the old previews that come with the tapes. The commercials for Disney World I remember from childhood. I love that the tape for Monster’s Inc. is blue. It astounds me. And one thing about old tapes: they’re nearly impossible to destroy accidentally. Unlike early 2000s DVDs which scratched and ruined, that plastic casing around the tape does a hell of a job keeping the movie intact. I have a tape I stepped on wearing shoes that cracked down the middle, but still plays fine.

Anyways, the next milestone will be two thousand. I think I can hit this by Christmas.