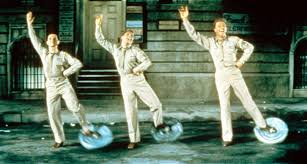 Three GIs back from overseas vow that their friendship will endure as they reenter the civilian world. A wager is made: in ten years, no matter what, they will reunite at their favorite bar. Ten years later, they show up, but find they have nothing in common. It’s an odd subject for the MGM musical treatment, and it’s difficult not to compare the film with Donen and Kelly’s previous collaboration, Singin’ in the Rain, but It’s Always Fair Weather is a fantastic musical in its own right. The dance numbers are unforgettable, especially Kelly’s serenade to Cyd Charisse on roller skates, which is pure joy. It’s satirical moments are probably too slight to make an impression, but the film does a moving job of portraying three men trying to reconnect after years apart.