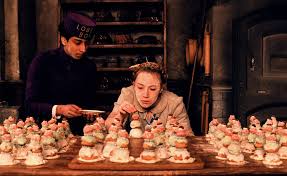 As this elaborate, multi-frame story unfolds, we meet Monsieur Gustave H. (Fiennes), manager of a luxurious and remote hotel in the made-up land of Zubrowka. Along with him for every adventure is the faithful lobby boy Zero Moustafa, who loves and admires his boss. The two get caught up in a sordid family drama once Monsieur Gustave inherits a rare work of art from one of his elderly lovers. The aspects of Wes Anderson’s work that I enjoy are in full display here. He is an extraordinary craftsmen, and an eccentric. The camera movement and mise-en-scene are exceptional. Ralph Fiennes, as he has demonstrated in other films, is very funny. Gustave H. is a wonderful character. Unlike my feelings about earlier films in Anderson’s filmography, this one seems more substantial. The relationship between Gustave H. and Zero is genuinely touching, and so is its wistful tone.
-Walter Tyrone Howard-
(187)