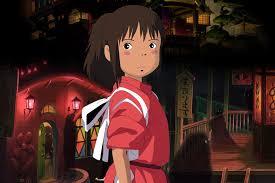 A bratty preteen, Chihiro, moving to a new city, gets lost when her parents are sidetracked by an apparent abandoned theme park. Stumbling into a world of spirits and witches and talking frogs, Chihiro fights to return home and save her parents. Forgive the overly simplistic synopsis, but the film defies explanation. It’s really to be seen and not described. Awe inspiring. One of the best films ever made. A beautiful work of popular art made my a master in Hayao Miyazaki. Each frame is staggering, and I love the characters in the film. Chihiro, at first, fairly whiny, quickly becomes a memorable, tough protagonist, and I love that even the scariest of supporting characters can become a friend in Miyazaki’s world. Sidenote: Disney Studio’s work to create solid dubbing for this film is also admirably done.