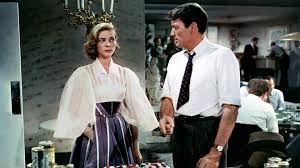 Breaking the fourth wall, married couple Mike (Peck) and Marilla (Bacall), with help from the cast of supporting characters, recount the wild first days of their marriage, complicated by differences in class, jealousy, and local gangsters who want Mike dead. Beautifully mounted in technicolor, Mike and Marilla’s story is reminiscent of the old ’30s screwball romances, but lacks the snap and sparkle of the classics in that category. Bacall is, of course, dazzling, and it’s fun to watch Gregory Peck in a comedy. He’s a million miles away from the great stoic characters he became famous for (Atticus Finch, most prominently).