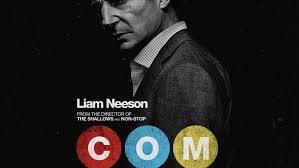 An ex-cop and recently fired insurance salesman, Michael (Neeson), receives a tempting proposition from a mysterious woman on a train one day.  A hundred thousand dollars if he can find a passenger known as “Prynne,” and plant a GPS device on her. Gradually, the stakes are raised, and his own family is put at risk. Michael races to get to the bottom of this strange setup. Indebted to Hitchcock’s classic The Lady Vanishes, this film, like a number of intriguing but inferior mysteries, gets less interesting as more becomes clear. The action becomes way too much. However, the middle portion of the plot, the investigation on the train, is exciting enough to make the film worth watching.