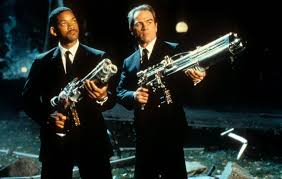 MI6 is a top secret government agency formed to protect Earth, and police all extraterrestrial activity. NYPD James Edwards (Smith) is MI6’s newest recruit, and an agent simply known as K’s (Jones) partner. They’re on the heels of a Bug, an insect-like alien, out to destroy the planet and start an intergalactic war. This is one of the strangest mainstream movies ever produced. Twenty years later, it remains as funny and inventive as when I first saw it. Smith and Jones are an odd couple made in heaven, and the first half of the film is one great scene after another. True, the second half becomes more of a generic action flick, but even that’s fine as the action is pretty exciting.