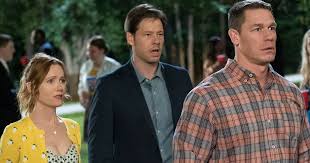 Three high school seniors-Julie, Kayla, and Sam-vow to lose their virginities on prom night. Once their parents find out, they vow to stop them. There’s Micthell (Cena), overprotective father of Kayla, Lisa (Mann), single mother to Julie, and Hunter (Barinholtz), largely absent father to Sam. Promoted as something of a female Superbad,  it’s nowhere near as funny as that film in my estimation, but it’s also not as derivative as I was led to believe. It’s an original movie, with solid characters and pacing.