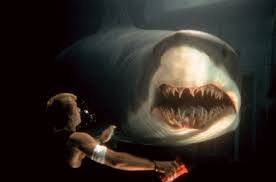 Manipulating sharks at a remote research facility in order to find a cure for Alzheimer’s disease, several members behind the project find themselves the victims of an experiment gone terribly wrong. The sharks escape, the facility floods, and the surviving members are being hunted by sharks with developed brains. The obvious flaws: supremely stupid material, horrendous CGI, and poor direction at times. Somehow, none of this offsets the fun that is to be had with this film. The characters and the actors behind them, though working with clichés and goofy punch lines, are surprisingly good, and the setting is used quite effectively. LL Cool J stands out as the preacher/ cook, and his ridiculous, corny, over-the-top but still very enjoyable performance perfectly embodies the film as a whole.