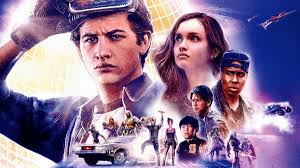 Set nearly thirty years in the future, Ready Player One imagines a world where virtual video games usurp reality, and a program, known as the OASIS, reigns. The OASIS’ creator, James Halliday (Rylance), has died and left an Easter egg within one of the games worth trillions of dollars to the first person to find it. Wade Watts (Sheridan) is an ace at gaming and knows more about Halliday than just about anyone, but he’s no closer to finding the treasure of sorts than anyone else. Then, he meets another gamer, Art3mis (Cooke), and falls in love with her. Together, they finally see a break through in tracking down the Easter egg. Meanwhile the head of one of OASIS’ competitors, Nolan Sorrento (Mendelsohn), will stop at nothing to find the egg, and he’s got money and a small army at his disposal. Treasure hunts are always going to be a compelling narrative, so really the film’s success comes down to the appeal of the characters. The characters in Ready Player One are moderately interesting, and so the film is moderately successful. It’s basically an animated film, which does wonders for the visuals, as Spielberg establishes a nice kinetic energy throughout the flick, and some of the visuals are pure magic. The characters suffer for it though since everything is so superficial. The soundtrack finds a few nice surprises and is used well, I thought. Ultimately, it’s a fine piece of entertainment, but never special.