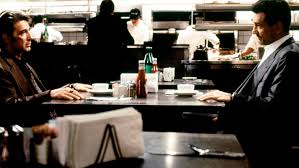 Massive cops and robbers tale centered around a cop, Vincent Hanna (Pacino), and a career thief, Neil McCauley (De Niro) caught up in a private game of cat and mouse while recognizing a kindred spirit in one another. De Niro’s McCauley attempts one last score on his way out with a woman he’s fallen for, going against his own code of not getting tangled up in a relationship. Hanna’s addicted to his job, and his wife and step-daughter suffer for it. This a large ensemble piece, with a number of supporting characters given their moments to shine, but ultimately this is about Pacino and De Niro, and how their characters, on opposite sides of the law, are essentially that cliché about being flip sides to the same coin. The material itself is well-worn and rather simple, but the style, the acting, the pacing, and craft are masterful.