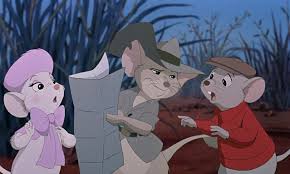 After a young Aussie boy gets kidnapped by a rare game poacher, the Rescue Aide Society enlists their top agents, Bernard (Newhart) and Ms. Bianca (Gabor), to help save him. All the while, Bernard struggles to ask Ms. Bianca to marry him due to constant interruptions and the threat of a new charismatic rival in Jake, a kangaroo mouse. The animation is first rate, but oddly enough, the movie loses something because of it. I found the old fashioned, storybook look of the first film charming. There are some intense and stunning action sequences in this film, but not as much heart as the original.