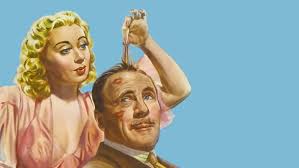 After a young woman, Gail (Blondell), gets murdered in a spooky mansion, she comes back as a ghost, and enlists the help of Cosmo Topper (Young), an older gentleman that lives nearby. He investigates, but the body is missing, and the house is full of suspects. Meanwhile, Cosmo’s wife, Clara (Burke), believes him to be having an affair, further complicating his life. The film works on a number of levels: as a light-hearted spookfest (the special effects are impressive), as a wild screwball comedy, and a genuinely surprising whodunit. Billie Burke with her Glinda the good witch voice, Donald MacBride as the tough but not so smart cop, and Eddie Anderson, the put upon black servant, steal the show.