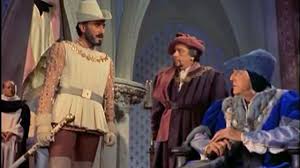 Inferior to If I Were King (1938) in depicting Francois Villon’s unlikely rise from street poet to King’s confidante during the Burgundian invasion in 15th century France, the folk hero of sorts is played, here, by unknown opera singer Oreste, who’s a fantastic singer but limited dramatically. The supporting cast is strong, most notably, Walter Hampden as King Louis XI, and the operatic music is good, but the films suffers from no sense of dramatic tension. It’s a respectable diversion devoid of any real spectacle.