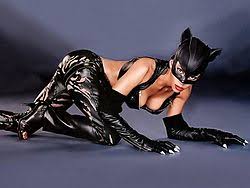 Patience Phillips (Berry) is a meek, overworked, overlooked artist in the fashion world, who gets killed after uncovering a conspiracy within her company. She revives mysteriously, and a Dr. Jekyll/ Mr. Hyde situation develops within her, spawning the alter ego, Catwoman. Soon she falls for a handsome cop (Bratt) who seems to be in every department with the police, as he arrives at every crime scene in the film.  An embarrassment for everyone involved, Catwoman’s plot is pushed forward rapidly through a series of dumb moments. The bad guys talk openly about their plot. Halle Berry has a painfully awkward basketball scene with Bratt (Love and Basketball, this is not). The cheesy puns. The catnip scene. It’s not boring. I’ll grant it that, but it’s just so dumb, much too frequently. It’s all a poorly executed excuse for Halle Berry to wear the costume. No need to watch the movie. Google images should suffice.