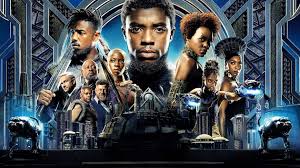 T’Chaka is dead, T’Challa (Boseman) is now king. Like any film, novel, or comic book will tell you, with being king, comes heavy responsibilities, and T’Challa is king of Wakanda, a country in the heart of Africa, abundant in resources, surrounded by suffering countries. As he struggles with setting the course Wakanda will take, Erik “Killmonger” Stevens (Jordan), an outsider, schemes to take over his rule and implement his own violent ideas. With the help of his former flame, Nakia (Nyong’o), his little sister Shuri (Wright), and Okoye (Gurira), leader of Wakandan special forces, T’Challa fights to preserve his people’s way of life, while deciding what to do to help the world around them.

More than just the story it tells on screen, Black Panther is truly an event, and what I can only hope is a turning point in Hollywood. You cannot talk about Marvel’s latest without considering how important it is culturally, how unprecedented it is, and how bizarre it is that something like this has never once happened before. A big budget film with a predominantly black cast. The closest equivalent would be Coming to America (1988) made for $39 million about thirty years ago with the biggest star at the time in Eddie Murphy. Not wanting to belittle how big that film was, I do, however, feel it necessary to point out the difference between a comedy vehicle for the biggest star in the world and a $200 million epic produced by a studio in Marvel that dominates global box-office and influences youth to a degree I’m not sure could be measured. There was a time-feels like just yesterday- that studio execs didn’t believe black people could sell a movie. Will Smith, I’ve read, talks about execs not wanting him to have a black love interest in Hitch because they didn’t think it’d sell. With Black Panther set to five-peat as box-office champ, and with over a billion dollars earned, I think they know now how absurd their thinking was because a billion dollars shows that it’s not just black people flocking to see it. A billion dollars means that everyone is going to see it. Preface aside though, my obligation in reviewing it remains to answer the question, is it good? I answer unhesitatingly, yes. Is it as good as its 97% on Rotten Tomatoes, 4 stars from reliable critic Peter Travers, 88% on Metacritic indicate? Cultural phenomenon aside, watershed moment aside, I say no. Black Panther is a strong film of ambition and intelligence but isn’t the transcendent superhero flick I’ve been waiting on from Marvel since their reign started with Iron Man (2008). Directed by the young and talented Ryan Coogler (Creed and Fruitvale Station), Black Panther digs deeper than most superhero fare, but not enough to be great.

What do I mean by transcendent? The superhero subgenre is in my eyes, supremely limited. Low on thoughtfulness, light on romance, often devoid of consequences, and pandering to a set crowd. I don’t consider myself the target audience for any superhero adventure. So I always go to these films hoping that this one would transcend my prejudices and have a strong appeal to me. That happened with Christopher Nolan’s Batman trilogy, happened early on with the first two Spider-Man entries, happened with a few of the X-Men films, especially Logan (2017). Hasn’t happened with a Marvel Studios film yet. They streamline their films, as if out of a factory at times, but I’ll enthusiastically declare that Black Panther avoids that fate. While not a great film in my book, it is an original, with a terrific cast and an outstanding villain. Chadwick Boseman makes a worthy hero, and he’s supported by women who threaten to steal the show. My problem with Marvel movies in the past has been their one-dimensional villains. Michael B. Jordan’s Killmonger is a fully formed character. One who is empathetic even. That the film succeeds in being intelligent and thoughtful is due to its making both the hero and villain into intelligent and thoughtful characters. Their fight is more about ideology than some boring motive like, I don’t know, money. My main indictment of the film revolves around the lack of exciting action sequences. The tribal fighting is a fresh diversion from the usual mind-numbing explosions we’re given, but beyond that, there aren’t any memorable thrills. The ending is anti-climactic and a real let down as protagonist and antagonist go toe-to-toe. The visuals are colorful, at times imaginative, but for the next installment, I’d like to see the Coogler up the ante on his action scenes. So I repeat good movie, like Doctor Strange was a good movie, like Spider-Man: Homecoming was a good movie. You can pretty much count on Marvel’s two other releases this year (Avengers: Infinity War; Ant-man and the Wasp) to be good, but when is one of these films going to be great?