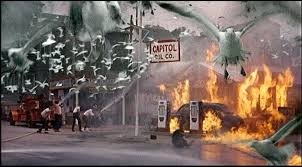 Melanie Daniels (Hedren), beautiful socialite and subject of much tabloid gossip meets Mitch Brenner (Taylor) in a bird shop in San Francisco. Presumably smitten with him, or perhaps intrigued by the brush-off he gives her, she follows him to his family’s home in the small, California town of Bodega Bay. There, unexplained mass attacks of birds terrorize the residents, and soon Melanie is fighting to survive. From a pretty silly premise comes what I would call the best disaster film in history. I like that it starts as an odd romantic scenario before veering into sheer madness and terror. It does what most films of the genre fail to do and that is to make me care about the characters before it puts them in these horrifying situations. While the special effects are certainly outdated, the film is still effective thanks to imaginative sequences and the already mentioned establishment of characters.