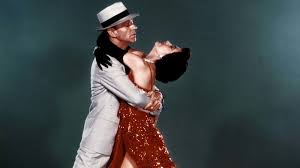 Fred Astaire is Tony Hunter, a once famous song and dance movie star, now attempting to make a comeback on the stage. Joining him in the production of The Band Wagon are the quarreling married couple, writers Lily and Lester Marton (Fabray and Levant), the egotistical director, Jeffrey Cordova (Buchanan), and the young and beautiful Gabriel Gerard (Charisse) who bickers relentlessly with Tony before the two fall hopelessly in love. The best of Vincente Minnelli’s musicals, which is to say the best of all musicals. Unique for its early use of meta humor with Astaire playing a caricature of himself at that point of his career. What’s best is its undertones of sadness in portraying the rigors of putting on a show filled with joy. Minnelli and Astaire were tremendous artists and this was their masterpiece.

One thought on “The Band Wagon (1953, Directed by Vincente Minnelli) English 10”