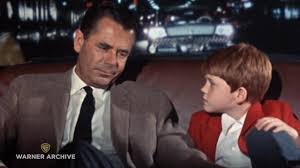 A recently widowed father, Tom (Ford), raises his precocious son (Howard) with the help of his housekeeper (Sherwood) and neighbor (Jones).  Soon Tom gets back in the dating world, falling for the wealthy socialite, Rita (Merrill), but his son doesn’t think she’s right for him. A hallmark of Minnelli’s work, this is a lively, colorful film. The central performances are quite good. Glenn Ford makes for a steady, solid father and Ron Howard was a very good child actor. He has a lot to do here, and is really the key to the whole picture. There isn’t much in the way of romantic tension, though Ford and Jones are antagonistic towards each other. This film is more about the father-son relationship.