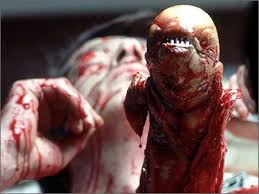 “In space, no one can hear you scream.” So says what is perhaps the best tagline ever. Many years in the future, the crew of Nostromo find themselves the prey of an unknown, intelligent alien creature picking them all off one by one. It’s a terrifying predicament, and Alien is rightfully placed among the best of its genre. Sigourney Weaver’s Ripley, simply by being practical and quick-witted, is one of film history’s great heroines. The set design, creature effects, and Ridley Scott’s use of space are first-rate. He keeps the camera tight on his characters, so we can never get a firm grasp on the space they attempt to navigate or the distance between them and the monster. We don’t know where Ripley’s running or what’s happening behind her. It’s a claustrophobic nightmare.