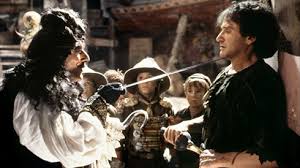 Peter Pan (Williams), all grown up and living in America, neglects his children and makes his living as an unscrupulous lawyer. On a visit back to London, Peter comes home to find his children missing and a note left by a Captain Hook. Soon Peter returns to Neverland and tries to remember his time as the remarkable flying boy. Severely flawed, Hook’s story often feels half-baked. Nostalgia, some better moments occasionally, are enough to make the film passable, plus Williams and Hoffman are great, but this is a pretty poor effort from Spielberg who’s usually a master of storytelling and entertainment.