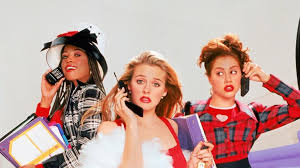 This seminal teen comedy updates Jane Austen’s novel Emma, starring Alicia Silverstone as Cher, a wealthy, beautiful, spoiled high schooler who intervenes in the love lives of those she deems less fortunate before realizing that she’s the one that’s clueless.  This is one of my favorite teen films. It successfully satirizes ’90s culture while also churning out a delightful romantic comedy. Silverstone, regardless of where her career went afterward, does a remarkable job here of making Cher likable despite being almost every quality we generally hate- vain, spoiled, selfish-and her take on the film, that it’s, “very deep. I think it was deep in the way that it was very light. I think lightness has to come from a very deep place if it’s true lightness,” while making no logical sense, somehow seems to capture the film correctly.