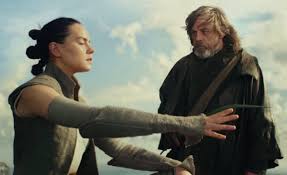 Star Wars: The Force Awakens was the Billion-dollar film equivalent of a bail-bond; no risk. It stepped only where the original Star Wars films left footprints for it to safely navigate, and showed little to no creativity. As a result, the masses were reasonably satisfied. After the fan-infuriating prequel trilogy, Abrams had one mission, and it was to give the fans what they want. The problem though is that the truly great and iconic films  tend to catch their audiences off-guard; surprise them. Audiences go, “I loved that. I want another film just like it.” Then when another film copies it, or they make a sequel, it’s not as interesting. What audiences actually want is too be blown away again, and so, for me, if this new Star Wars trilogy was going to be worth it, the sequel, this second installment needed to veer off dramatically from the retread that was laid out in The Force Awakens. I was skeptical. I said Disney is only concerned with milking the original trilogy for all the money it can. Fortunately,  The Last Jedi comes like a kick in the head. It’s the best Star Wars film since the original trilogy.

In this Star Wars, the resistance is quickly losing what little ground they have, as the First Order sees their opportunity to go in for the kill. The rebels, basically reduced to refugees at this point, need to find a new home base, but can’t outrun the First Order. Finn and Poe Dameron, along with Rose Tico (a new character played by Kellie Marie Tran), hatch a scheme of their own to save the day, against the wishes of acting Officer in Charge, Vice Admiral Holdo (another new character played by Laura Dern). Meanwhile, Rey, who finds Luke Skywalker at the end of the previous installment, seeks to learn the ways of the Jedi, and bring Luke out of hiding to turn the tide of the war. Luke, older, weary, and haunted by an event that happened years earlier with his former pupil, Kylo Ren, resists. Not unlike previous installments, but, in my opinion, to a greater degree, The Last Jedi balances a  large number of characters and their individual quests. You have your classic characters: General Leia (Carrie Fisher in her final film), Luke Skywalker- more of an invisible presence throughout the first movie, but a major player in this one; in fact, Mark Hamill receives first billing-and then Chewie, C3P0, and R2D2. I felt the first film coasted too often on the appeal of old Star Wars movies. Specifically, I felt it faltered on the new generation of characters: Rey, Finn, Poe, and Kylo Ren. Rey (Ridley) was cool, but Finn was used too much for comic relief, Poe was underwritten, and Kylo Ren was like a teenage girl. The Last Jedi atones. Each actor is given their chance to shine, and they’re uniformly strong. Mark Hamill, apparently unhappy with the direction his character takes, nevertheless delivers an engrossing and moving return for the iconic Luke Skywalker. Finn is still a goofy hero, but it’s mostly endearing. Poe Dameron and Kylo Ren, played by Oscar Isaac and Adam Driver respectively, take the biggest leaps in The Last Jedi. Poe finally feels like a real, fleshed out character and Kylo Ren’s still present moodiness served a more interesting role in the story, even pushing it to some surprising places. Newcomers Benicio Del Toro and Laura Dern are award winning actors, and they go a long way to making this darker, weightier film successful.

Does The Last Jedi veer off expectations? I say so. It mainly took events that I expected and moved them ahead of schedule, making them surprising. The big reveals that The Force Awakens seemed to be setting up, fizzled in its sequel, but I was fine with that too. Fundamentalists, nitpickers, internet trolls, and people who love clichés will likely have bones to pick with this film. It took chances. It defied expectations. As a result, it’s a grand, bold, and exciting epic. You can complain about Luke’s evolution, scratch your head at his milking of a weird alien creature, but you can’t deny the awesomeness of Rey and Kylo’s duel in main antagonist Snoke’s sex-cult room (that’s what I’ve nicknamed it). I can’t wait for the finale.