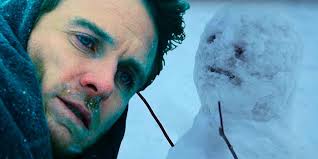 Something about me: A murder mystery has to be extremely bad for me not to enjoy, and so, full disclosure: I was entertained for much of this 8% on Rotten Tomatoes travesty. Michael Fassbender stars as Harry Hole, the lead detective from a series of novels by Jo Nesbo, this time out, chasing a serial killer who stalks wanton women and leaves snowmen as his calling card. The tone is lifeless, Val Kilmer’s brief role is bizarre (his dialogue is dubbed over), the mystery reveal is contrived, as all mysteries are, but generally with more skill, and there is a whole segment of the film, with J.K Simmons (a side-plot, I guess), that’s left completely unresolved. I believe the director when he says that a large chunk of the film’s script was unshot due to budget concerns and lack of time. The Snowman is, at times, skillfully made, but the lack of coherence makes the central gimmick come off as silly rather than scary. Overall, I’d say The Snowman is in need of a director’s cut that unfortunately will never come.