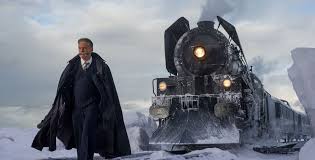 A man, who turns out to be a violent and repulsive criminal, is found dead in his locked room aboard the Orient Express, a train travelling from Turkey to Europe. Unfortunately for the killer, Hercule Poirot (Branagh) is also on the train, and, in his own words, he is probably the greatest detective ever. It’s a classic whodunit scenario: everyone’s a suspect, lots of red herrings. As the second major adaptation of Agatha Christie’s novel, after Sidney Lumet’s star-studded take on the material, Branagh’s film follows much of the same formula: a cast full of A-listers with luxuriant art direction and beautiful visuals to bolster Christie’s incredibly clever murder mystery. This film succeeds on many of those same notes: it is truly a gorgeous film, the cast is well-matched to their roles, and the technical skill of the production team is plainly on display at every turn. The main issue here is that it is a whodunit in which I already know the solution (from reading the novel and seeing the previous film adaptation). Branagh does his best to alter the material just enough to feel fresh without being unfaithful to the material. He adds some depth to his understated take on Christie’s greatest detective. I liked his performance. He also adds two red herrings to the story, to some effect, but mainly this film feels too much like a cover band. It’s fine, but not completely necessary.