Excellent week, mixing in old favorites with multiple trips to the theater (seeing American Made and Blade Runner 2049).

Plot Summary-After arresting a wealthy and corrupt man’s brother, Sheriff John T. Chance (Wayne) must hold his small town prison off from a horde of deadly mercenaries. The only help he has are his two deputies, the self-destructive Dude (Martin), and the lame Stumpy (Brennan).

My Take-Classic western, one of the last and best of the old Hollywood style, coming right before the genre would be redefined by Italians and Sam Pechinpah. Centered more on characters and dialogue than most westerns, Rio Bravo is a terrific entertainment, kind of a boy’s fantasy. Hanging out with friends. Facing off against villains. Romancing a beautiful woman. 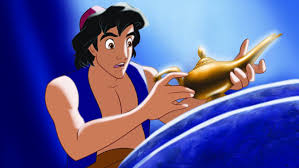 Voices of Robin Williams, Gilbert Goddfried, Scott Weinger
Voices of Robin Williams, Gilbert Goddfried, Scott Weinger
Plot Summary-A common street thief, Aladdin, gets caught in the evil schemes of a
power-hungry Vizier. This leads him to a magic lamp holding an all-powerful, wish-
granting genie (voiced by Robin Williams), which Aladdin uses to make himself into
a possible suitor for Princess Jasmine.
My Take-Not much in terms of substance, but easily one of the most entertaining
films in Disney’s canon. Williams’ Genie steals the show, and the songs are extremely
catchy.
-Directed by Ron Clements and John Musker, 1992
Rudyard Kipling’s The Jungle Book     79% on Rotten Tomatoes             8 (VHS) 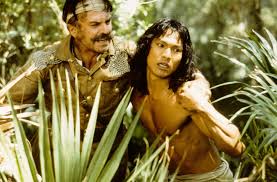 Starring Jason Scott Lee, Sam Niel, Lena Headey, Cary Elwes, John Cleese
Plot Summary-Loosely inspired by Kipling’s stories, here, a grown Mowgli, raised by wolves, reunites with a childhood friend, and attempts to find his way in society (one  formed by an imperialist culture).
My Take-Superb action adventure fantasy. Several exciting and terrifying sequences including runs from tigers and baddies being buried alive. Lee does a credible job of selling the fish out of water aspect to his character. There have been several excellent adaptations of The Jungle Book, and this is definitely one of them.
-Directed by Stephen Sommers, 1994
Beautiful Creatures   46% on Rotten Tomatoes                  5 (Netflix) 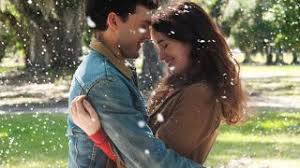 Starring Alden Ehrenreich, Alice Englert, Jeremy Irons, Emma Thompson, Viola Davis, Emmy Rossum
Plot Summary-A teenage boy in a hick town dreams of getting away. Soon he falls fort the weird new girl, and discovers that she comes from a long line of witches, or “casters.” The family disapproves, and a more serious plot involving an evil caster surfaces.
My Take- Lame, if not completely terrible, teen romance. The acting is uniformly good. Ehrenreich, set to star in the Han Solo spinoff, shines here, and will likely go on to much better things. The story is rife with cliches, and the portrait of a southern town as full of idiotic bible-thumpers is tiresome.
-Directed by Richard LaGravenese, 2013
Insiang    No Rotten Tomatoes Score                 8 (Filmstruck) 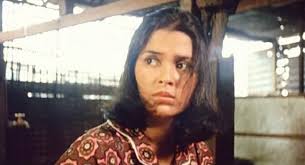 Starring Hilda Korenel, Mona Lisa, Rez Cortez
Plot Summary- In poverty stricken Manila, beautiful Insiang deals with a boyfriend unwilling to commit, a mother who is critical of everything and everyone, and her mother’s brutish boyfriend who has eyes Insiang.
My Take- Lurid, melodramatic story mixed with gritty, documentary style filmmaking. Effective drama, with a beautiful leading lady.
-Directed by Lino Brocka, 1976
Pocahontas    56% on Rotten Tomatoes              7 (VHS) 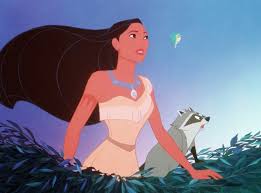 Voices of Mel Gibson, David Ogden Stiers, Christian Bale, Irene Bedard
Plot Summary-Fantasizing of the historical meeting between Pocahontas of the Powhatan tribe and John Smith of the British imperialists. In this Disney interpretation, the two fall in love and do their best to stop the oncoming violence that threatens the people they love.
My Take-Weaker work from Disney’s greatest era. It is still an absorbing story with beautiful animation, music, and voice work, but he ending is unsatisfying. Too much of a wrap-up.
-Directed by Mike Gabriel and Eric Goldberg, 1995
-Walter Howard-